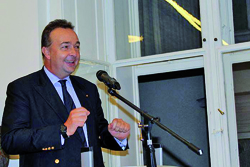 Britain, the Austro-Hungarian Monarchy and Paneuropa.

A report on the Karl von Habsburg Lecture in the Stallburg on 20.10.2016, by Wolfgang Geissler

Originally this report should have been written by our Vice-President Dr Alexander Christiani who already had moderated so expertly the Karl von Habsburg Lecture on Thursday evening, 20th October, but then the honour of writing (unfortunately without reference to any notes and only from memory) fell pretty unexpectedly into my lap. So here we are.

Let me start with a few personal statements: I am very grateful to Karl von Habsburg that he had accepted my invitation as far back as February 2016 for Thursday night’s Lecture without any hesitation. I am aware how busy he is. I am also very grateful for the active help of Rainhard Kloucek, Secretary General of the Paneuropean Movement Austria. And last but not least I am very proud of our Austro-British Society for staging this event so successfully.

That Archduke Karl can fill an auditorium is a well documented fact. Thursday evening was no different. Close to 150 guests awaited his arrival in the premises of the Foreign Policy and United Nations Association of Austria (UNA-AUSTRIA), Stallburg. Our President Dr Kurt Tiroch welcomed our guest speaker, Vice-President Dr Alexander Christiani made the introduction and Karl von Habsburg apologised that so many in the audience had to stand. What followed was a tour de force which held the audience captive.

The immediate question burning on everybody’s lips was obviously BREXIT (how confused and opaque the situation in the UK was and is demonstrates this amusing but true anecdote: immediately after the result of the Brexit referendum was announced there was a flurry of activity on Google search with the main question: “What is the EU?”) but because of its European dimension the Lecture evolved quickly into the (Pan) European Question. What is Europe? What is the future of Europe? Are there lessons to be learnt from the past? Karl von Habsburg would not be the descendent of the most European Family in history had he not answers to give. “If you don’t know where you came from, you won’t know where you are going to because you don’t know where you are!” was the favourite quote of his famous father Otto von Habsburg. Europe can learn a great deal from the old Austrian Monarchy in particular leading up to World War I, the Archduke explained. Here are just a few points:

The current period within the EU can be compared to the dire situation of the Austro-Hungarian Empire before the Great War. Karl von Habsburg referred to the novel “The Radetzky March” by Joseph Roth where the District Commissioner, Count Chojnicki and von Trotta argued about whether the monarchy still existed. “How can the monarchy not exist?” asked von Trotta. “Of course,” the Count replied, “in the literal sense, it still exists…. But it’s falling to pieces here and now.” Does this not sound familiar? Are we not also “predicting” that the EU is “falling to pieces here and now”?

When reforms are urgently required and the institutions, even if willing, don’t act fast enough you have a situation similar to Hungary after 1867 with her constant demands which fuelled nationalistic reactions amongst the other members of the monarchy. This compares well with Britain’s past demands, the re-emergence of petty nationalism as a reaction by others and Brexit.

To “reclaim” Sovereignty (“We want our country back” © UKIP) is a sign of Nationalism. Subsidiarity is the only way forward for Europe, as is Shared Sovereignty. Nationalism leads to conflict particular if one feels superior to one’s perceived inferior neighbours. Nationalism is the product of the French Revolution, which in itself was so catastrophic. Nationalism is the opposite of Patriotism. Patriots can love a village, a town, a country and even something bigger like Europe or the old supranational Monarchy: Nationalism is the enemy of the European idea as it was to the existence of the Dual Monarchy before World War I.

If we want to remain competitive, be it in innovation or to play a particular role in the world, then we can only achieve this by cooperating as Europeans in all our diversity just like the Monarchy did successfully decades before the war.

Empress Maria Theresa once stated famously that if a law could not be understood by the humblest swineherd out in the province then it was not a good law. Since the Vienna Congress the Rule of Law became the cornerstone of European states. Rulers and Ruled under the same Rule of Law.

Bureaucracy has to be people-orientated. The Archduke once again cited the old Monarchy as a positive example where centrally paid civil servants represented officialdom (Vienna) in the smallest and remotest community. Not the distant Eurocracy of Brussels.

A serious problem is European Security. Britain played a big role. What will follow? A European Army is difficult to create but not European Battle Groups. All it would take is a European Command structure. He did also mention the worrisome Russian new military doctrine whose main innovation was the concept of “de-escalation”—the idea that, if Russia were faced with a large-scale conventional attack that exceeded its capacity for defence, it might respond with a limited nuclear strike.

The European Union is not yet the whole of Europe. Europe will only be whole once every country has joined. Then we’ll have Paneuropa! To the question of Russia he said, that, if not all of Russia, she certainly belongs to Europe (“If you visit Saint Petersburg you must be blind if you don’t recognise it as European!”) but not until she has decolonised. Russia is the last colonial power. A statement, Archduke Karl’s father, Otto von Habsburg, repeatedly made. He reminded us of De Gaulle, who only led France into the Common Market after she had shed her colonies.

When Karl von Habsburg started to check his watch, I think at least twice, so not to overrun time wise, it was immediately clear that the audience would have wished him to do so! The reader can imagine that the Question and Answer session which followed the lecture was extensive and very lively. It also must be noted that His Imperial Highness (yes, I give him his title!) stayed until the very end of the evening surrounded by a cluster of people engaged in deep conversation.

Finally, I do not require any notes to remember that the catering and wine, courtesy Café Ministerium, was very well received. I can vouch for that!